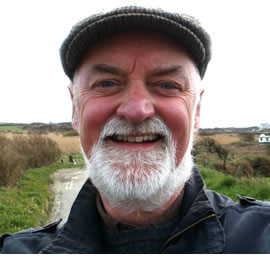 Steve Griffiths was born in Trearddur Bay, Anglesey in 1949, grew up there and in Amlwch, lived in London most of his working life, and now lives in Ludlow. He has published seven collections of poems since 1980, with Rex Collings, Seren and Cinnamon, before Weathereye: Selected Poems. You can see filmed performances of the Late Love Poems (2016), for which he received Arts Council England funding, on YouTube: see Late Love Poems.

His work has been widely broadcast and he has read in several countries, including a series of seven readings in New York in 2012. He is one of the hundred twentieth century Welsh poets writing in English featured in The Library of Wales ‘Poetry 1900-2000’ (2007, Parthian Books). He has a collection of new poems up his sleeve.

After reading English at Cambridge at the end of the Sixties, he began a working life engaged with the consequences of, and some solutions to, poverty, inequality and poor health, first as a welfare rights worker in London, later as a researcher and consultant in social and health policy, in the twenty years from 1993 working freelance all over Britain for local and national government, health bodies, and charities.  Working for central Government at the turn of the century, he was an architect of a billion-pound investment in supported housing while working at weekends on his poetic exploration of a fallible Utopia, An Elusive State. He later wrote studies on reducing emergency hospital admissions. In retirement, he has published several policy thinkpieces online, notably Dark times for those who cannot work (2010) and Challenging the Democratic Deficit (2018)

Five paragraphs from the life

He spent much of his childhood on beaches and cliffs. His mother ran a guest house; when he was 11, she got a new job as Canteen Supervisor in a chemical works in Amlwch, the origin of al-Chwm in ‘An Elusive State’, and the family moved to the other side of the island. They moved in a milk-truck and he nursed his cat in the cab.

The day job often squeezed out the poetry; but the quarrel between mental landscapes has also created a defining tension in his work. He has constantly returned to the scene of his childhood for renewal. Though he is an ‘expert’ on social conditions in London, he admits that after forty years he still saw the place from the outside, a boy who grew up on a beach, playing in the same rockpools as R.S.Thomas 35 years earlier. He was Vice-Chair of the Welsh Academy (English Language section) at the beginning of the Nineties, and was made a Fellow, forming a strange triangle of fellowships, with a Visiting one at the Faculty of the Built Environment at the University of Central England, and a Senior Research Fellowship at the Centre for Psychological Therapies at the University of Chester.

After his fourth book, his first Selected Poems (Seren, 1993), he didn’t publish for fifteen years, until An Elusive State – Entering al-Chwm (Cinnamon, 2008).   This virtual disappearance from the poetry world between the ages of 44 and 59, and his choosing silence, at the heart of that period writing nothing for five years (1994-1999), was painful.  There was a sense of meaninglessnes – and depression – and withdrawal felt like the right response.   The birth and death of al-Chwm, his imaginary Utopia, over four intense years from 1999 was transformational, as was the beginning of the Late Love Poems from 2006.  In 2013 he and his wife Wendy moved from London to Ludlow, and in 2014 he retired from the day job.  Shropshire restored a spaciousness to his life that he had missed for a long time.

Approaching the age of seventy, he began to look over what he had done with his life.  The idea began to take shape of a Selected Poems that would pull together what he valued of his work between 1975 to 2016, from those seven collections.   An unexpected journey opened up.  He had always been a very slow poet.   He was shocked at how unfinished some – not all – of his early poems seemed.  He began a process of restoration – many cuts, many tweaks, and some radical re-entry into the original spirit that led to rediscoveries.   It dawned on him that in some cases, he’d taken forty years to finish a poem.  But that’s all right.

The resulting book is called Weathereye: Selected Poems.   To keep a weather-eye out (or ‘open’), for a change or a danger in the weather, is to be watchful, alert, to keep one’s wits about one.   He’s a child of sea-horizons.   But increasingly, too, Whether I…..: poems that negotiate uncertainty.

“It’s a parallel universe, a magical epic, a comfort, a mystery”